Fatty acid synthesis occurs similarly to Beta-oxidation – acetyl groups are added to a growing chain, but the mechanism of the pathway is distinctly different from being simply the reverse of Beta-oxidation.

Fatty acid synthesis occurs in the cytosol (not mitochondria). It uses a moiety called Acyl-carrier protein (ACP) instead of CoA and the reducing agent NADPH (not NAD/FAD). It will be noted that there are structural similarities between the Coenzyme A portion of CoA and the Phosphopantetheine moiety of ACP.

The reaction has a different stereochemisry from Beta-oxidation and the form of the unit added is actually a three carbon unit (malonyl-CoA) which is decarboxylated to incorporated a net 2 carbon unit. As we shall see, fatty acid biosynthesis can be broken in to three separate pathways shown below: Transport of Mitochondrial Acetyl-CoA into the Cytosol

Acetyl-CoA is produced in two ways in the mitochondria –

Acetyl CoA will accumulate when the ETS/oxidative phosphorylation slows (why? – a good exam question).

Under these conditions, acetyl-CoA is transported out of the mitochondrion to the cytosol where it can be used in fatty acid synthesis. This is accomplished using the tricarboxylate transport system in the inner mitochondrial membrane which pumps citrate out 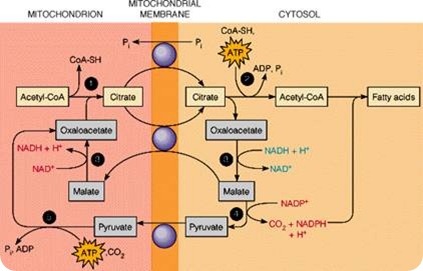 Acetyl-CoA, of course is used in synthesis of citrate when combined with oxaloacetate. Citrate transferred into the cytosol is broken back to oxaloacetate and acetyl-CoA by ATP-citrate lyase (using ATP and CoA). Oxaloacetate can be reduced to malate by malate dehydrogenase and NADH. Malate can be converted to pyruvate by malic enzyme and NADP+.

The resulting pyruvate is permeable to the inner mitochondrial membrane and diffuses in. Inside the mitochondrion, pyruvate can be converted to oxaloacetate by pyruvate carboxylase (along with bicarbonate ion, and ATP), completing the cycle.

An alternative path is to transport malate across the inner membrane and convert it to oxaloacetate.

The first committed step of fatty acid biosynthesis is catalyzed by Acetyl-CoA carboxylase. The enzyme contains biotin, and adds a CO2 (resulting in a carboxyl group) to the methyl end of acetyl CoA. Note that this reaction is an energy requiring process (1 ATP per Malonyl-CoA formed).

Acetyl-CoA carboxylase is an interesting enzyme. Studies of the enzyme from birds and mammals indicate that it forms long linear polymers. The polymer appears to be the active form of the enzyme. Monomeric units are inactive. Citrate shifts the polymer – monomer equilibrium towards polymer formation.

Another regulation of Acetyl-CoA carboxylase is by hormones. Glucagon, epinephrine, and norepinephrine trigger a cAMP dependent phosphorylation (remember the cascade system) of the enzyme that shifts the equilibrium towards monomer formation. Insulin, conversely, stimulates desphosphorylation, favoring polymerization.

This multifunctional enzyme catalyzes the seven different reactions whereby two carbon units from malonyl-CoA are linked together, ultimately to form palmitoyl-CoA. In some systems, the activities are present on separate enzyme units.

In other cells, a single polypeptide chain has multiple activities that can be isolated after protease treatment. The enzyme complex can exist as both a monomer and dimer. The dimeric form is the fully functional form of the enzyme. The overall synthesis of palmitate from acetyl-CoA requires 14 NADPHs, and 7 ATPs.

Steps of fatty acid synthesis starting with Acetyl-CoA and Malonyl-CoA are shown in in the given Figure.

The reactions are as follows:

The multiple enzymatic activities integrated into Fatty Acid Synthase complex are probably related to the growing fatty acid being “swung” into the appropriate catalytic region of the synthase.

The product of fatty acid synthase action, palmitate, is but of course one of many fatty acids synthesized by cells. Elongases are enzymes that act to lengthen palmitate to produce many of the other fatty acids. Elongases are present in mitochondria and the endoplasmic reticulum. Elongation using elongase in the mitochondrion involves a mechanism that is essentially the reverse of Beta-oxidation except substitution of NADPH for FADH2 in the last reaction.

Like all metabolic pathways, cells must have appropriate controls on fatty acid metabolism to be able to meet energy needs. Precursors for energy generation – triacylglycerols in chylomicrons and VLDL, fatty acid/albumin complexes, ketone bodies, amino acids, lactate, and glucose – are all carried in the blood as needed for various tissues. One mechanism of regulation involves hormone release.

Insulin opposes the effects produced by Glucagon and epinephrine, stimulating glycogen formation and triacylglycerol synthesis, by favoring dephosphorylation of the enzymes phosphorylated as described above.