One of the major reasons for studying Biochemistry is to understand how living organisms utilize the chemical energy in their environment to carry out their biochemical activities. This requires an understanding of the simpler principles of physical chemistry and thermodynamics as they apply to living organism. Also required is an appreciation of the so-called “energy-rich compounds‘ that permit the living organism to trap and sub sequentially utilize the chemical energy contained in the food materials it consumes. The sun is the ultimate source of energy for all life on the planet earth. That energy, as sunlight, is trapped by photosynthetic organisms and used to convert CO2 into the organisms’ cellular material composed mainly of proteins, carbohydrates and lipids but also smaller amount of nucleic acids, Vitamins, coenzymes and other compounds. Some of those products of photosynthesis (carbohydrates and lipids) are in turn, utilize by non photosynthetic organism, mainly animals as a source of energy for growth, development and reproduction.

There are THREE types of reactions are present in Metabolism. They are

The reactions release energy and that therefore have negative enthalpy changes. On reaction energy diagrams, the products of exothermic reactions have energy levels lower than those of starring materials.

The reactions absorb energy and that therefore have positive enthalpy changes. In reactions energy diagrammed, the products of endothermic reactions have higher energy levels than the starting materials.

This type of reactions are not released any energy.

Bonds Cleavage and its types:

In Intermediary Metabolism, covalent bond (σ-bond) are formed by the help of  two atoms by sharing of pair of electrons. When the two atoms are separated from each other, bond fusion (or cleavage) is said to have taken place.

The cleavage process can occur in two ways:

When one electron of the bonding pair goes with each of the departing atoms of the fission is symmetrical (0r) homogenous and is called “Homolytic cleavage” (or) “Homolysis”.

When a covalent bond breaks in a fashion that both the bonding electrons are appropriated by one of the two departing fragments (atoms or groups), it is said to have undergoes “Heterolytic cleavage”.

Atoms involved in the formation of a bond can not come close together to each other than a certain distance where the potential energy is minimum. The average distance between the nuclei of two atoms bonded to each other is used under the name of bond length or bond distance. 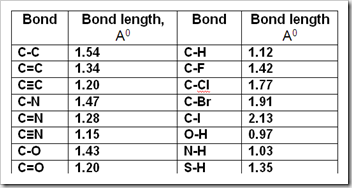 Thus bond length may be defined as the average distance between the centers of nuclei of the two bonded atoms. It is expresses in angstrom (A0) units (1A0 =10-8 cm).

The molecules made up of three or more atoms, the average angle between the bonded orbital is known as bond angle, Ф. Fundamentally, the value of bond angle largely depends on the nature of the bonds concerned. The bond angle in water molecule formed by the overlapping of two s-orbitals of hydrogen atoms with one 2p orbital of oxygen atom should be of 900. The actual H-O-H bond angle is 1040 31’. Bong angles are important to analyse the behaviour of molecules in intermediary metabolism.

Now let us disscuss about the metabolic reagents in intermediary metabolism.  The presence of a charge on the reactant although certainly helps the attack of the reagent on the reactant, it is far from being essential. Indeed the requisite unsymmetrical charge distribution may be induced by the mutual polarization of the reagent and reactant on their close approach as when bromine adds to ethylene.

Thus on the basis of the above principle, most of the reagents can be classified into following two types.

The name implies electrophilic (electro=electron, phile=love) reagents are electron seeking (or) loving and thus attack the substrate at the point of maximum electron density. Thus an Electrophle is a species having electron-deficiency atom (or) centre. The electrophilic reagent may be positively charged species or neutral molecule with electron deficient centre. Some of the important electrophiles are given below:

It is interesting to note that since the electrophiles are capable of accepting electrons pair, they are Lewis acids.

The reactions involving the attack of electrophiles are known as electrophilic reaction.

It is interesting to note that since the nucleophiles are capable of donating electrons pair, they are Lewis bases.

The reaction involving the attack of nucleophiles is referred to as nucleophilic reactions.

Thousands of chemical reactions are taking place inside a cell in an organized, well co-organized, and purposeful manner; all these are collectively called as Intermediary Metabolism. The term Metabolism came from Greek language (metaboleG = Change; balleinG= to throw).

In the living organisms, there are Three different phases of metabolic phases done. These are : 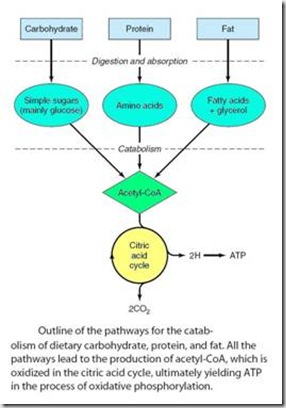 Metabolism is the overall process through which living systems acquire and utilize the free energy they need to carryout their functions. The term Catabolism and Anabolism were coined by the physiologist Gasket in 1886.

(degradation) A degradative process in which complex molecules are broken down into simpler ones; includes processes such as Cellular Respiration and Digestion. The meaning of the Catabolism came from Greek (kataboleG = Throwing down; balleinG= to throw). It is also spelt as katabolism. Energy released during this process is trapped chemical energy, usually as ATP. Eg: Cellular Respiration

(biosynthesis) A constructive process in which complex molecules are synthesized from simpler ones; consumes rather than produce cellular energy; includes processes such as Photosynthesis and assimilation; opposite of catabolism. The meaning of the Anabolism came from Greek (AnaboleG = Throwing up; balleinG= to throw). This needs energy. Eg: Photosynthesis

An array of enzyme-catalyzed chemical reactions that bring about transformations of certain organic compounds vital to the organism, constitute “Metabolic pathways” (or) “Metabolic routes”.
Three Principle characteristics of metabolic pathways, there are

To obtain the product, a metabolic sequence should be essentially irreversible. Example fro typical metabolic pathways are Glycolysis, Synthesis and Degradation of liver glycogen from (or) to Glucose.

Some metabolic sequences may have a common path for many steps and then branch into two (or) more separate paths. Examples to the Branched metabolic pathways are, in carbohydrates metabolism, “Glucose-6-Phosphate” act as starting precursor molecule for the following pathways. Glycogen synthesis, EMP pathway (or) Glycolysis, HMP shunt.

Metabolism is the term used to describe the interconversion of chemical compounds in the body, the pathways taken by individual molecules, their interrelationships and the mechanisms that regulate the flow of metabolites through the pathways. All the metabolic activities take place in Liver. Metabolic pathways fall into THREE categories:

Path ways that process the Major Products of Digestion:

The nature of the diet sets the basic pattern of metabolism. There is a need to process the products of digestion of dietary carbohydrate, lipid and protein. These are mainly glucose, fatty acids and glycerol, and amino acids, respectively. All the products o digestion are metabolized to a common product, acetyl~coA, which is then oxidized by the citric acid cycle.

Metabolism can be considered in different types based on the Biomolecule: