Carbohydrates composed of ten or more monosaccharide units are classifieds polysaccharides, and their molecules are colloidal in size. They may be considered as condensation polymers in which the monosaccharides (or their derivatives such as the amino sugars and uronic acids) are joined by glycosidic linkages. By far the most important naturally occurring polysaccharides are Starch and Cellulose.

What is the Classification of Polysaccharides?

When they are formed by the same monosaccharides, they are called homopolysaccharides, like starch, glycogen, and cellulose formed each of them by hundreds of molecules of glucose linked by glycosidic linkages. 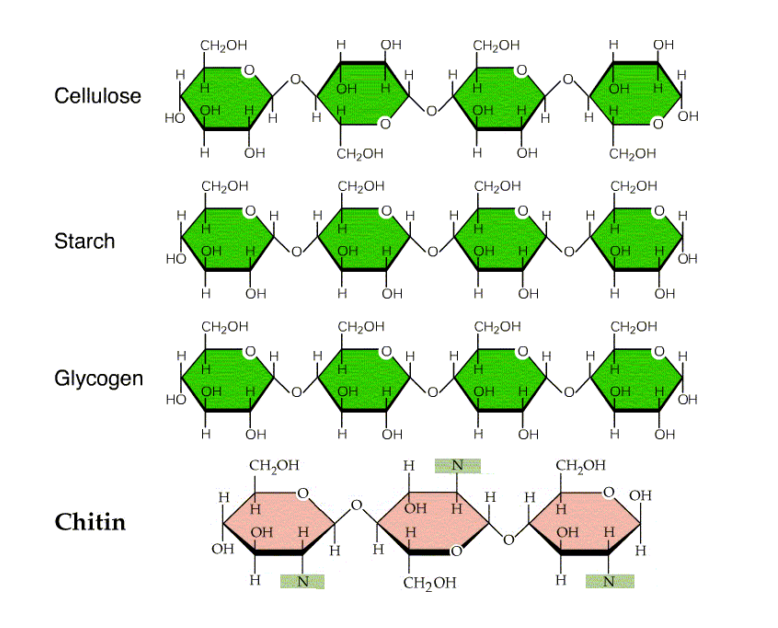 Cellulose is the main structural material of trees and other plants. The general formula of Cellulose is (C6H10O5)n. Wood is 50% cellulose, while cotton wool is almost pure cellulose. Other sources of cellulose are straw, corncobs, bagasse, and similar agricultural wastes.

Cellulose is a linear polymer of D-glucose residues bonded by β(1, 4)-O-glycosidic linkages. It is the most abundant carbohydrate in nature.

The long fibers of cellulose are held together by intermolecular hydrogen bonds. Hydrogen bonding continues in the same plane with other chains and in planes above and below this plane to form strong, fibrous bundles. It made cellulose very appropriate for its structural function in plants

Cellulose is a colorless amorphous solid having no melting point. It decomposes on strong heating. it is insoluble in water and most organic solvents. However, it dissolves in Schweitzer’s reagent which is an ammoniacal solution of cupric hydroxide.

Starch is the second most abundant carbohydrate in nature. It is the main contributor of carbohydrates in our diet. It exists only in plants, stored in the seeds, roots, and fibers as a food reserve. The chief sources of starch are cereals, potatoes, corn, and rice.

The biological functions include, in plants, the main way of storage of sugar, and of energetic sources; in humans, the first supply of glucose on a diet.

Starch is actually a mixture of two structurally different polysaccharides – Amylose (20%) and Amylopectin (80%). When starch is heated with hot water, it can be separated into these components. The part soluble in water is amylose and the remaining fraction is amylopectin.

Both amylose and Amylopectin are composed of D-Glucose units.

The disaccharides that can be obtained from the digestion of amylopectin are maltose and isomaltose.

The structure of glycogen is very similar to amylopectin but more branched, with one branch every 8 to 12 glucose unit.

Glycogen is the way in which glucose is stored in animals. Glycogen is stored mainly in the liver (to release glucose to blood when necessary) and in muscle, where it is used as a reserve of energy for muscular contraction.

Heteropolysaccharides contain two or more different monosaccharides. Usually, they provide extracellular support for organisms of all kingdoms: the bacterial cell envelope, or the matrix that holds individual cells together in animal tissues, and provides protection, shape, and support to cells, tissues, and organs.

Other common constituents are sulfate groups linked to certain monosaccharides. Usually, heteropolysaccharides are associated with proteins forming proteoglycans, glycosaminoglycans or mucopolysaccharides (since they are abundant in mucous secretions). As a group, they perform diverse functions: structural, water metabolism regulation (as a reservoir of water), cellular cement, biological sieve, biological lubricant, docking sites for growth factors, among other functions.

Established specific functions of some glycosaminoglycans are:

The chondroitin sulfates are among the principal mucopolysaccharides in the ground substance of mammalian tissues and cartilage and occur combined with proteins.

Three different chondroitin sulfates have been isolated and designated as A, B, and C.

The A, B, and C have been differentiated on the basis of Optical rotation and their behavior towards testicular hyaluronidase enzyme.

Glycosaminoglycans are synthesized in the ER and Golgi. They are degraded by lysosomal hydrolases. A deficiency of one hydrolase results in a mucopolysaccharidosis. These are hereditary disorders in which glycosaminoglycans accumulate in tissues, causing symptoms such as skeletal and extracellular matrix deformities, and mental retardation.

Examples of these genetic diseases are Hunter and Hurler syndromes.

These diseases, caused by different enzyme deficits, are characterized by physical deformities, mental retardation, and disturbances in the degradation of heparan sulfate and dermatan sulfate.