There are a few differences in the lipids (and metabolic routes to making them) of eukaryotes and prokaryotes. We will not be concerned about distinguishing the routes of their synthesis. For our purposes, the routes are the same. Additional lipids contained eukaryotes beyond those for prokaryotes include phosphatidyl choline and phosphatidylinositol.

There are three routes to forming phosphatidic acid we will be concerned about:

2. Synthesis of CDP-diacylglyerol from glycerol-3-phosphate and CTP: (CDP-diacylglycerol is a branch point in biosynthesis some of the glycerolipids)

4. A pathway for synthesis of phosphatidyl choline: 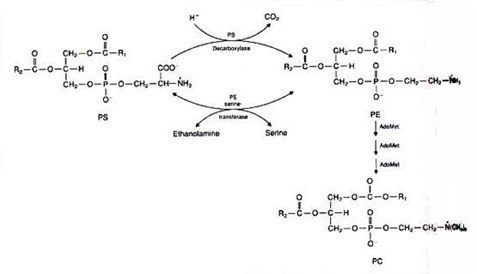 Methylation of phosphatidyl ethanolamine is accomplished with an activated derivative of methionine called S-adenosylmethionine. After the methyl group is donated, S-adenosylhomocysteine (AdoHcy) is generated. AdoMet and AdoHcy are shown in the top. Formation of AdoMet is depicted in the bottom.

Glycerophospholipids are not metabolically inert compounds, though it is not fully understood how and when substitutions and modifications of them occur. Infants with respiratory distress have a defect in the metabolism of lung surfactant, a phospholipid in lung tissue. 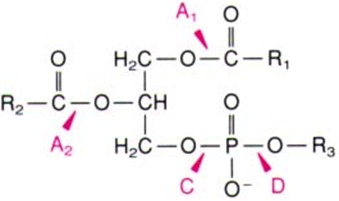