Do these notes explain What is Protein and classification of proteins in Biochemistry?

The proteins are the cellular macromolecules most abundant constituting 60% of the dry weight of cells.

They consist of one or more polypeptide chains and has a molecular weight greater than 10,000.

They have a unique and diverse structure. The polypeptide chains fold more or less heavily on themselves inducing a large number of different three-dimensional structures.

It is this that is causing a variety of function allowing them to be responsible for thousands of reactions in a different cell. Their name “Nano-machines” cell is thus justified.

For the wide variety of cellular responses, we can easily imagine that the number of different proteins known to date is very important: 60,000.

Proteins are derived from the translation and transcription of genes, their synthesis is under genetic control.

All proteins are made ​​up of amino acids (20 amino acids, of course on amino acids ) but they do not have of biological activity. Amino acids are the alphabet of the protein structure.

Ways of Classification of proteins?


According to the classification of proteins, these are again classified into forms, functions, and composition.

1. Classification of proteins based on structure 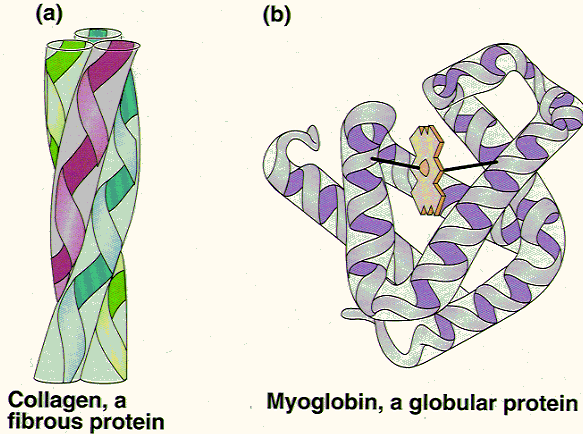 In this classification proteins, The polypeptide chains are elongated and wound about an axis in a helical shape. These are structural proteins. They can be extracellular and will then be insoluble in water and have a protective function:

They can also be intracellular include myosin and tropomyosin muscle cells. careful not to confuse fibrous and filamentary (globular proteins attached to each other).

Soluble in water, they are spherical. They have a much more complex than the fibrous protein structure, but they have a much greater variety of biological activities. The best example of Globular protein is MyoGlobin.

They can be membrane and then have roles as:

They may be soluble and be plasma such as albumin, protein hormones such as LH, cytosolic proteins circulating proteins such as Calmodulin.

2. Classification of proteins based on function

They may be involved in:

3. Classification of Proteins Based on Composition

4. Classification of Proteins based on solubility

The different globular proteins can be classified based on their solubility in different solvents, such as water, salt, and alcohol.